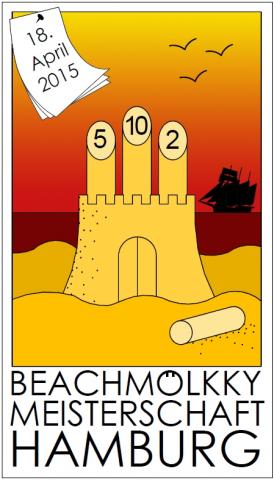 After the years 2013 and 2014 there is also a Beachmölkky Championship in 2015. It will take part at 18th of april 2015, Mölkkylovers will meet again in the Beachcenter Hamburg, Germany.

Playing is going on from 10 o'clock to 18 o'clock. The schedule will be shown shortly before the date. We have 4 Playgrounds and the maximum number of teams ist 16. It depends on the players if we will play with 3 or 4 player in one team.

The cost are 20 Euro for each player, the use of the sauna is included.

Registration possible by sending an email to registration@beachmoelkky.de